Sphero founder Paul Berberian gave a fantastic talk today in Boulder as part of the Boulder Start-up Week. Berberian revealed some fascinating behind-the-scenes details about how the Sphero BB-8 toy came to be!

Most people know that Sphero was part of an “accelerator” program with Disney. Disney was helping Sphero develop its products in exchange for an stake in the company.

During the talk, Berbarian noted that BB-8 mechanical prop in the movie was actually based on the Sphero toy, rather than the other way around!

Disney was so secretive about BB-8’s character, Sphero didn’t have most of the details about the droid until the Force Awakens trailer came out. Sphero only had some sketches and the puppet stand-ins used in early filming as a basis for the toy. They had to sign all kinds of secrecy contracts and still weren’t given much information on BB-8 until the trailer was released to the world. So they saw BB-8’s onscreen representation at the same time as everyone else! Once the trailer came out, they fleshed out the toy.

“Lucas created the character BB-8, a droid with a sphere and a head on top of it that could do cool things. There’s a prop shop out of England called the Creature Factory they made several puppets (for the film)…they didn’t have a fully robotic ball.

We then created our toy and shared it…with Disney company. That team (prop makers), eventually created a functioning real world life size BB-8. But we weren’t involved in that. We took the puppets and turned it into a…toy. We gave them the inspiration to try to make it real. By us demonstrating we could make an actual physical one doing these cool thinks, I think we inspired them. But we’re a separate company.”

Sphero brought along a full-size BB-8 prop—so of course, I had to do a selfie! 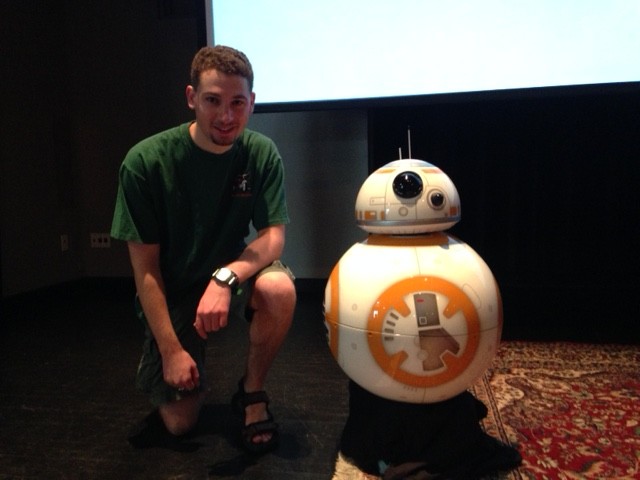